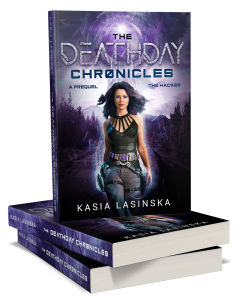 Want a FREE BOOK? Join Kasia’s exclusive Reader’s Club and get The Hacker (The Deathday Chronicles) for FREE, for a limited time only*

Everyone has secrets, but mine could get me killed.

I’m Em, and my deathday was yesterday.

At least, that’s what the Government thinks.

The digits on my wrist may not have killed me, but they’ve put a target on my back.

Now, a fugitive in my own city, I need to figure out how I lived past my deathday. And why I was the only one…

It’s not just about finding answers. It’s about survival.

One thing is certain: I’m out of my depth. Even my hacking skills might not be enough to get me out of this one…

Full of action, intrigue, and a heroine who doesn’t take ‘no’ for an answer, The Hacker is the addictive companion novella to The Deathday Chronicles, the young adult dystopian series that’s perfect for fans of The Hunger Games, Divergent and Legend. ★★★★★

What are you waiting for? Scroll down and download The Hacker for FREE now!

“A thrilling premise for a YA dystopia and a ruined world I’d like to spend more time in.”
– Derek Murphy

*Kasia hates spam and will never share your email address. You can unsubscribe at any time.

We use cookies to ensure that we give you the best experience on our website. If you continue to use this site we will assume that you are happy with it.Ok, I consent.